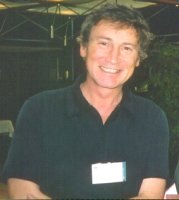 I think of myself very much as a "Bangor" person. Having moved here from south east Wales in 1972, I graduated from the University of Wales, Bangor with a B.Sc. in Biochemistry and Soil Science (1975) and with a Ph.D. in Environmental Microbiology in 1979. I was appointed to the academic staff of the then Department of Biochemistry & Soil Science in 1977, initially as a demonstrator and (from 1979) as a lecturer in soil science. When the science faculty re-organised in the early 1990s, I became part of the School of Biological Sciences, where my interests became more concentrated in the area of environmental microbiology in general, and the microbiology of acidophiles in particular.

Apart from working at UWB, I have spent two sabbatical leaves at the Idaho National Laboratory (INL: http://www.inel.gov/) at Idaho Falls, U.S.A. (a U.S. government Department of Energy facility) where I worked alongside Dr. Frank Roberto. I have been fortunate to continue working with Dr. Roberto since then, mostly in studting extremely acidic sites in Yellowstone National Park (see BART references). I have also developed links and collaborations with many other academics and industrial scientists both in the U.K. and overseas, some as a result of shorter term visits. Continued informal collaboration with Professor Doug Rawlings of Stellenbosch University, South Africa (http://www.sun.ac.za/) has led to a number of prestigious joint publications, including a recent textbook (“Biomining”) that we edited together.

Besides my university duties, I currently hold (until 2011) a Fellowship with the Royal Society (the U.K.’s national academy of science that was established in 1660; http://www.royalsoc.ac.uk/) which is enabling me to devote 50% of my time to working with Rio Tinto, a major international mining company that has been a major supporter of BART’s research for a number of years. 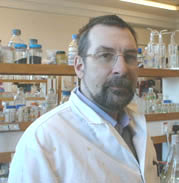 I graduated from the Dept of Biochemistry & Soil Science, UCNW Bangor in 1981. After a short spell working at Birmingham University, I returned to Bangor where I completed an M.Sc. and then joined the permanent technical staff in 1984. I started work in the department's teaching laboratories and then moved to work in the animal biochemistry section with Dr J. Islwyn Davies. Here I carried on work that I started for my M.Sc. on the interplay between fatty acids and glucose utilisation in adipose tissue. In 1992 I moved within the newly formed School of Biological Sciences to work with Prof J. W. Payne on peptide transport systems. This work focused upon the application of computer modelling to peptide ligands recognised by bacterial peptide binding proteins. The work successfully identified the molecular recognition templates (MRT) present in the di-, tri- and oligopeptide substrate pools. In 2003 I obtained my Ph.D. based on the publications coming from these studies. Shortly after this I started to look after the school’s newly acquired MALDI-TOF and FTICR mass spectrometers. In 2007, following Stewart Rolfe’s early retirement, I joined BART. 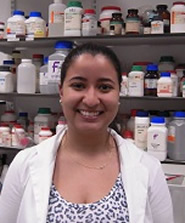 I came to Bangor to pursue a full-time PhD in September 2014. I am from Brazil where I graduated from Universidade Federal de Alfenas, MG in 2011 with a Bachelor degree in Biotechnology. As a degree course, Biotechnology is highly multidisciplinary comprising different aspects of each science. Despite of this range of opportunities I have always preferred the Environmental Sciences which led to a MSc in Biotechnology at Universidade Estadual Paulista, SP in 2014.

For my Master’s dissertation I studied the effect of redox potential on chalcopyrite bioleaching. Chalcopyrite is the most abundant copper-bearing ore in the world. However, the copper dissolution from chalcopyrite has some limitations and a substantial number of parameters that could be studied to improve the metal recovery from mining industries. When I was almost concluding the Master’s dissertation, the opportunity of joining a renowned research team at Bangor University came to me and I said YES with no hesitation.

My studies here are been sponsored by a Brazilian funding agency (CNPq) through the Science without Borders program. My project is, in general, based on the study of H2S production by the heterotrophic acidophilic sulphate-reducing bacteria (aSRB) using as energy source the organic compounds produced by acidophilic algae, as mechanism to recover metals from acid mine drainage (AMD) by metal precipitation.

I graduated from the State University of Campinas, Sao Paulo, in 2010 with a bachelor degree in engineering. During my undergraduate studies, I had the opportunity to work on a wide range of topics including quality control of industrial processes and the bio prospection of anti-oxidant potential of plant extracts from central-west region of Brazil. In the last two years, I worked with fermentation processes, bioinformatics and molecular biology analysis of Amazonian natural products.

In 2013 the Vale Institute of Technology (ITV) invited me to start a PhD project in Bangor. Accepting this “once in a life time” opportunity was a great challenge because not only was it a big change in my study area, but also I had to move to another country.

At BART, I am studying the impact of acidophilic microorganisms in the mobility of metals in low pH conditions. My PhD project has two different approaches: one is the characterization of novel acidophilic iron-oxidizing and iron-reducing bacteria and their possible role in the bio-processing of mineral ores and bioremediation of metal contaminated sites. The second approach is to evaluate the efficacy of a consortia of acid-tolerant/acidophilic sulfate-reducing bacteria to remediate neutral and alkaline pH mine waters contaminated with chalcophilic transition metals. It has been achieved by the implementation of a continuous flow low pH sulfidogenic bioreactor that uses reduction of elemental sulfur to precipitate metals in solution.

Before I joined BART I was living in Belem, in the Northern Region of Brazil, where I was born. As an Amazonian I have learnt the necessity to create a sustainable business to make a positive impact in a very poor and undeveloped region. Thus, one of my career goals is help to promote science within amazon universities.

My PhD studies are been sponsored by a Brazilian funding agency (CNPq) through the Program Science without Borders.

I obtained a BSc in Environmental Biology from the University of Alcalá. This university is located in Alcalá de Henares (Spain), whose historical centre is one of UNESCO’s World Heritage Sites and where Miguel de Cervantes (El Quijote’s author) was born. After that I moved to the south of Spain to do my master’s degree in Oceanography in the University of Cádiz (Cádiz, Spain). After three years, I returned to Madrid to start a PhD within the FPI program at the Geological Survey of Spain (Madrid, Spain) and the University of the Basque Country (Bilbao, Spain), under the supervision of Dr. Javier Sánchez España and Dr. Iñaki Yusta Arnal. My PhD topic focused on the microbial characterization of two acidic mine pit lakes of the Iberian Pyrite Belt, under the Spanish Government project “Biotic and abiotic controls of chemical underwater stratification of acidic mine pit lakes” (project reference number CGL2009-09070). During my PhD, I was a recipient of a FIMIN (The Functionality of Iron Minerals in Environmental Processes, European Science Foundation) grant to visit the UFZ-Magdeburg (Centre for Environmental Research-UFZ, Germany) and collaborate with Dr. Katrin Wendt-Potthoff and Dr. Mathias Koschorreck. I also received a Spanish Government grant to complete an extended collaboration project in Bangor University with Prof. D. Barrie Johnson. When this program ended, I decided to continue my stay in Bangor until I finished my PhD. After completion of my PhD, I joined BART as a research officer on the Coal Authority project “Research study into the role of microbiological communities in passive treatment of coal mine waters”. Recently I joined the project “Beyond Biorecovery: Environmental win-win by Biorefining of metallic wastes into new functional materials (B3)”. This programs is funded by the Natural Environment Research Council (NERC) as part of its Resource Recovery from Waste programme. The B3 project focuses on developing biotechnologies to recover valuable and strategic materials from wastes, generate enriched solids for bio-conversion into new products and to put in place a supply chain for converting waste to product. As part of the project we are focusing in the recovery of valuable metals from mine tailings wastes and producing nanoparticles from acid mine waters.

I graduated from Newcastle University in 2010 with a BSc in Environmental Science, and in 2011 with an MSc in Industrial and Commercial Biotechnology. My Master’s project studied thermophillic extracellular nuclease producing bacteria, and their ability to disperse biofilms. Subsequently I undertook a PhD with Professor Jon Lloyd (University of Manchester) and Professor Julia West (British Geological Survey) investigating the potential impact of microbial processes during the geological disposal of intermediate level radioactive waste.

After completion of my PhD I joined the BART team as a Research Officer working on the COG3 project. This project, funded by NERC through the Security of Supply of Mineral Resources programme, aims to investigate the geology and biogeochemistry of cobalt in natural systems, and the use of bioprocessing techniques to extract cobalt and to recover novel cobalt products. My research will involve carrying out experimental work to investigate the use of microorganisms to leach cobalt containing ores, which could include the oxidation of ores where sulfide minerals are dominant, reduction of lateritic ores, or the bioleaching of manganese nodules. The subsequent production of cobalt biominerals using microbially generated hydrogen sulfide will also be studied.